“I am not suggesting that hypnosis cures cancer. I am, however, stating that it played a large role in healing my mind.”

This #FanFriday is dedicated to an amazing woman that reached out to me earlier this year to share her incredible story. She continues to humble me with her kind words and shows how someone can have an unstoppable spirit; even when faced with great adversities. One of the founders of #RichardsAngels, I dedicate this Fan Friday to a new friend and inspiration, Silvia Anne Milone-Martin.

From My Pain Came My Purpose

For those who are skeptical about the role that humor and hypnosis plays in the treatment of cancer, I am a living testimony to its power.

I did not realize it then, on that chilly autumn day in early November 2016 , when I was I first diagnosed with Stage 3 Aggressive Breast Cancer, how humor and hypnosis would be my lifeline during some of the darkest moments of my life.  However, it happened in mid-February of the following year.

It was during this time period that I had been admitted into the hospital and placed in ICU for a week with a condition known as Neutropenia; basically my white blood cells were dangerously low.  Since everyone who entered the room had to be dressed head to toe in hazmat outfits, in order to not spread any germs whatsoever, I could only visit with company for brief periods of time.  Needless to say, I was scared, lonely, and depressed.   Since I had my iPad, I went on the internet in search of something to occupy my mind.  I came across Richard Barker, the Incredible Hypnotist, while surfing through YouTube videos.  Since this point, I had never heard of this comedy stage hypnotist’s work so I decided to view a few of them to help pass the time.  Without even noticing,  I had spent nearly 5 hours watching what I thought were some of the most hilarious footage of my life.  That was it, I was hooked.

Over the course of my time in the hospital, I had introduced every nurse, doctor, custodial worker, assistant, anyone and everyone to the world of Richard Barker’s Incredible Hypnotist.  Some staff were actually spoken to for spending too much time in my room, watching and laughing with me.  Some workers later on told me that, since they were dressed in hazmat suits anyway, why bother leaving to only change into one again at a later time.  Soon, the question being asked was, “Are you a hypnotist?”.  And this got me thinking…

Once I was discharged from the hospital, I started to think about taking an online course on hypnosis.  Since I was on medical leave from my job, due to my illness, I had plenty of time to learn about this topic that now engaged my nearly every waking thought.  Through my research, I discovered Richard’s Book, Secrets of the Stage Revealed: The Guide to Hypnosis and Stage Hypnotism.Though the book is over 350 pages, I devoured it in three days.  My appetite to learn more on the topic was insatiable.  Between watching stage hypnosis videos and reading this book, I still found that I wanted to learn more.

During this time period, I had started chemotherapy regime.  I was facing eighteen weeks, 6 cycles, with each cycle running about 7-8 hours in length.  That is a lot of time, to sit hooked up to an intravenous.  How to pass the time?!  So, again, I watched video after video and introduced all the nurses and then some to my new world of stage hypnosis.  We did more laughing; some of the other cancer patients got disgruntled with us.  Picture it.  Here I am in a cancer center, surrounded by about 25 chairs, all filled most of the time, patients hooked up to IV’s, normally a very solemn place.  There’s me with some of the staff, belly laughing so hard, a patient asked us to please keep it down while they try to sleep.

It was during this time period that I decided to write Richard an email explaining how his videos had brought so much joy to myself and those around me.  About a week later, after sending this email off, I came across an excerpt of it on Richard’s Facebook Page. 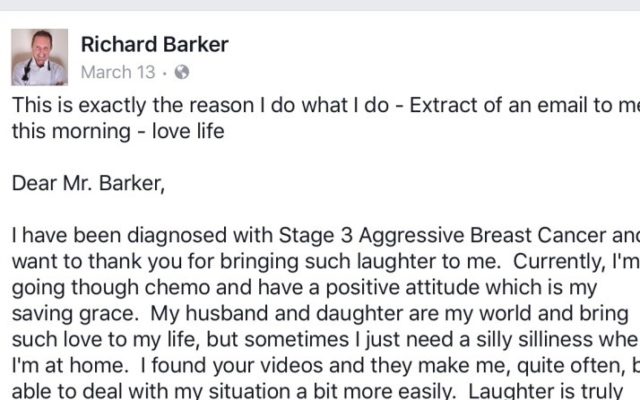 I soon sent Richard a friend request and we began communicating via Facebook and texts.  I didn’t know it at the time, but this new friendship would prove to be invaluable in my recovery process.   Through Richard’s friendship, I found myself connecting with other hypnotists and my knowledge of the subject continued to flourish.

Though there was much laughter, there was also an equal amount of pain and fatigue. Chemotherapy wreaked havoc on body and my mind.  During my second cycle of chemo, I remembered something very important.  Several years ago, I had experienced firsthand the incredible power of hypnotherapy.   As a child, I was molested and raped and for years suffered debilitating anxiety.  Hypnotherapy saved my life by teaching me how to live without constant worry and fear.  It also stopped the nightmares and my migraines lessened as time passed.  It crossed my mind, that if hypnotherapy played such a significant role in my recovery then, perhaps it could do the same for me now.

Over time, I started to become aware that some of my side effects from the chemotherapy began to lesson.   I am not suggesting that hypnosis cures cancer.  I am, however, stating that it played a large role in healing my mind.  When your mind is in a positive state, the body follows suit.  Between the laughter and love that I surrounded myself with on a daily basis, along with the learning and practicing of hypnosis, I was started to feel alive again for the first time in a long time.  A positive mindset can be extremely beneficial in the day to day quality of life.   Hypnosis is such an amazing tool and the mind is such an extraordinary piece of equipment.  When these two forces come together remarkable things happen.

When chemotherapy was over, radiation started.  During this time, I continued to take online classes in the area of hypnosis.  I was finding that I didn’t just want to learn about the topic, but I wanted to become certified in some area of it.  This is the time I became interested in becoming certified as an NLP (Neuro Linguistic Programming) Practitioner.  NLP is an approach to communication, personal development, and psychotherapy created by Richard Bandler and John Grinder in California, United States in the 1970s.

It was during this time period in my treatment, when another friend of Richard’s, Fallon Jane and I, came up with the idea to create a forum to become involved in to support Richard’s work, but also to spread the word that, for those who need support or those who want to support others, laughter and humor play a large role in keeping a positive state of mind.  With Richard’s permission, the forum Richard’s Angels was born.  Now in its third month of creation, the forum is well over 320 members.  Members from all around the globe post daily positive affirmations, words of encouragement, jokes, and antidotes.  Countless friendships have been made.  Global conferences take place often with members that stretch across the globe.

During the whole time of my illness, my husband Peter, and daughter Molly were my whole world, lifting me up and keeping me positive.  However, even they needed a break from time to time.  It was during one of these little breaks where I discovered the wonderful world of hypnosis and the true friendship of Richard Barker.  My life has been touched for the better and I am forever grateful.  From my pain, came my purpose.

Can You Relate to This Amazing Hypnosis Testimony?

Would You Like to Try a Clinical Hypnosis Session?

The Cost Of Being Stuck

END_OF_DOCUMENT_TOKEN_TO_BE_REPLACED
How Coronavirus Is Impacting Small Business as well as Hypnotists

END_OF_DOCUMENT_TOKEN_TO_BE_REPLACED
How Hypnosis Can Help Your Fear of Driving

END_OF_DOCUMENT_TOKEN_TO_BE_REPLACED
Hypnosis: 7 Ways It Can Improve Your Health

END_OF_DOCUMENT_TOKEN_TO_BE_REPLACED
How Does the Hypnotic Induction Work? Will It Work on Me?

END_OF_DOCUMENT_TOKEN_TO_BE_REPLACED
Hypnosis for Erectile Dysfunction: 7 Ways Hypnotherapy Can Help You

END_OF_DOCUMENT_TOKEN_TO_BE_REPLACED
Hypnosis for Erectile Dysfunction: 7 Ways Hypnotherapy Can Help You

END_OF_DOCUMENT_TOKEN_TO_BE_REPLACED
Answered: Can Everyone be Hypnotized?

END_OF_DOCUMENT_TOKEN_TO_BE_REPLACED
How To Hypnotize Anyone

END_OF_DOCUMENT_TOKEN_TO_BE_REPLACED
Hypnosis for Sleep: Everything You Need To Know