Take a Peek at a Stage Hypnotist Media Tour

Join Richard Barker on the second day of his media tour in New York City.

After his tour through Asia and before a quick trip to LA, the Incredible Hypnotist shares a look into his media tour in New York City. If you missed day one of the media tour, showcasing street hypnosis footage and hypnosis discussions with locals, check out: Behind the Scenes: A Comedy Stage Hypnotist Media Tour in NYC. The behind the scenes tour continues with additions to the crew and a hypnotherapy session at Reader’s Digest.

Starting the Day with a “Coffee”

Richard Barker and the Incredible Hypnotist NYC crew get an early start on their busy day. After a night of drinking with the locals, Richard jokes with colleague, Joni Neidigh, “When you hang out with me, you’ve got to expect to be in the bar until 1 or 2 in the morning. It’s just part of it; it’s part of the experience. Skip breakfast and replace it with a rum and coke disguised as a coffee.” He lifts his coffee cup up and we all wonder if the comedy hypnotist is pulling our leg or if he is in fact drinking a little hair of the dog. Joni laughs and reciprocates a fist bump, “Skip breakfast; skip lunch; skip dinner. That’s how we roll.”

Power walking through the busy streets of New York City, the Incredible Hypnotist introduces Joni to everyone. Joni is a friend and fellow hypnotherapist from Jacksonville, Florida that came to help Richard during his busy media tour. Joni runs a very successful hypnotherapy clinic, Aim for Success. While Aim for Success helps an assortment of clients using hypnotherapy, the firm specializes in helping professional swimmers reach their optimal potential. “Joni Neidigh has a long history of working with Olympic level swimmers and professional athletes. She has helped everyone from beginners in competition to advance standing athletes. Her experience will lead to your success. Mental coaching and sports performance hypnosis, can help a swimmer create mental toughness, and help your routine be the most productive possible.” 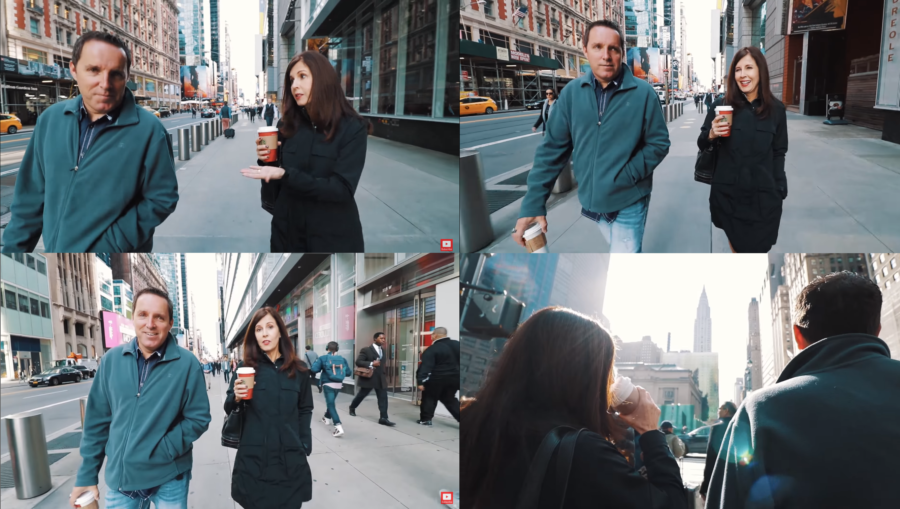 Who’s Behind the Camera?

is the brains behind the camera and has been documenting the entire media tour. Would you be surprised to learn that not only is Anthony a wiz behind the camera, he’s an amazing performer as well. “Hadlen is a Full-Time World Class performer. An expert in illusion, sleight of hand, hypnosis, NLP, combative arts, language patterns, muscle and body reading, and presentation. He has been performing his whole life beginning with Martial Arts at age 8, continuing to grow and expand from there. At 29, he runs his business Hadlen Entertainment and has performed in 11 countries.”

Check out Hadlen’s Facebook Fan Page to be amazed by his videos that showcase just how magnificent his performances are.

The Incredible Hypnotist started teaching Hadlen some of his marketing secrets throughout the NYC trip. Hadlen admitted that his brain was overloaded with all of the Marketing Ninja‘s tactics and techniques Richard was passing onto him. Richard laughs, “His brain exploded; it actually exploded in the Irish Pub and he passed out.”

While the team is committed to making a behind the scenes video, they rush to catch the train to meet with editors at Reader’s Digest in White Plains, New York. Aboard the train, Richard, in his sleep deprived state, confesses before taking a nap, “I actually have a snuggie. I have the original pink one for laying on the couch. I step into it like a hospital gown and then my dog can lay on me and I don’t need a dog blanket.” Pictures, Richard, we need pictures! Ha.

The stage hypnotist arrives at Reader’s Digest just in time for his desk side appointment. A desk side in media is a simple, off-camera interview with an editor of a publication. It’s a time when Richard can explain hypnotherapy; it’s uses; benefits and modern day processes. Well, that’s usually how a desk side goes but when you’re a world-renowned hypnotist, everyone wants a taste.

“First thing that I 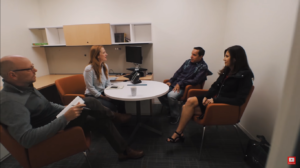 wasn’t expecting, there were two editors instead of the one I was told about. Then, one of them caught me off guard when she told me she wanted to be hypnotized; that wasn’t discussed beforehand. She wanted to remove her sugar cravings. Normally I charge a lot of money for a private, 1-on-1 hypnotherapy session. I don’t like giving away free stuff, that’s just me, but I thought why not.”

In fact, Richard Barker’s private hypnotherapy sessions cost $1,500 and is a highly sought after service. So everyone watching the desk side portion of the interview may wonder, well, what does the Incredible Hypnotist get out of it?

“I get a slot confirmed in Reader’s Digest; which is huge. That publication is a free way to promote my services. Not only my services, but for other hypnotists as well. So with the increased readership in the Reader’s Digest Magazine… they’re going to read about hypnosis and the reporter is going to attest to the removal of her sugar cravings and it helps the industry. It 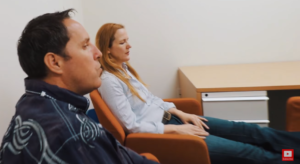 helps us all to be able to promote our services and that’s why I’m doing what I’m doing. I won’t stop until everyone knows the truth about modern day hypnosis and that the days of pocket watches and hypnotic spirals are behind us.”

The reporter loved the hypnotherapy session to stop her sugar cravings. It was so successful, Joni, who was just sitting in on the interview, fell into a hypnotic trance as well. Richard laughs, “Two for the price of one.”

The stage hypnotist gave the editors at Reader’s Digest a copy of his most recent book, “Selling Hypnotically: The Art of Suggestion.” And just as quickly as they arrived, the crew hit the pavement once more. Richard not only has a talent for speaking extremely fast, his power walking almost left Joni stranded alone in the city a few times. Watch the vlog to catch Richard shouting behind him, “Come on, Joni. Keep up!”

Update: So what happened? Did the reporter finally kick her sugar addiction? Check out her article by visiting our Hypnosis FAQ Database. Can Hypnosis Stop Sugar Cravings?

Checking in from Grand Central Station

“Hey everybody, just giving you an update. We’re in Grand Central Station. For those of you who haven’t visited New York City yet, you have to add it on your list of landmarks to see. You must come out and see Grand Central Station for yourself. Look at these massive windows behind me; the lighting is just awesome. This iconic building has been in loads of movies and TV shows for a reason. Come check it out.”

His update gets interrupted suddenly, “Speaking of the devil, here’s Joni. Hey Joni, how was your toilet break?” Flabbergasted and slightly blushing, Joni shoots back, “Did you just announce that I got back from the toilet?!” Richard laughs, “She’s been dying for the toilet for like an hour and a half. Listen, did you have a good pee?” Joni quickly attempts to change the subject but seeing her face flush over, Richard prods on, “I’m just pulling your chain, Joni; just pulling your toilet chain.”

And the video ends on a hysterical joke that has earned it’s own hashtag: #PullingYourToiletChain.

Do you like stepping into the shoes of a stage hypnotist?

More to come so stay tuned. And if you missed Day 1 of the media tour, check out our previous article: Behind the Scenes: A Comedy Stage Hypnotist Media Tour in NYC and catch all the kooky things we caught on tape.

END_OF_DOCUMENT_TOKEN_TO_BE_REPLACED
The Cost Of Being Stuck

END_OF_DOCUMENT_TOKEN_TO_BE_REPLACED
8 Awesome Celebrity Hypnosis Stories That You Need to Know

END_OF_DOCUMENT_TOKEN_TO_BE_REPLACED
How Coronavirus Is Impacting Small Business as well as Hypnotists

END_OF_DOCUMENT_TOKEN_TO_BE_REPLACED
How Hypnosis Can Help Your Fear of Driving

END_OF_DOCUMENT_TOKEN_TO_BE_REPLACED
Hypnosis: 7 Ways It Can Improve Your Health

END_OF_DOCUMENT_TOKEN_TO_BE_REPLACED
How Does the Hypnotic Induction Work? Will It Work on Me?

END_OF_DOCUMENT_TOKEN_TO_BE_REPLACED
Hypnosis for Erectile Dysfunction: 7 Ways Hypnotherapy Can Help You

END_OF_DOCUMENT_TOKEN_TO_BE_REPLACED
Hypnosis for Erectile Dysfunction: 7 Ways Hypnotherapy Can Help You

END_OF_DOCUMENT_TOKEN_TO_BE_REPLACED
Hypnosis for Overeating: Get Over Your Food Addiction