How Do Hypnosis Shows Work

Hypnosis shows are real and work by gaining consent and the trust of the person volunteering for the show. If a person does not want to be hypnotized then they won’t be. The volunteer then is guided into hypnosis using an induction and funny comedy suggestions are then given to them which makes for an entertaining show. It is never embarrassing and they are never made to look stupid. Did you know that approximately 69-79% of people are moderately susceptible to the effects of hypnosis during a hypnosis show? With such high numbers, hypnosis identifies as a form of therapy. More so, hypnotists are comedy stage shows in record numbers. Therefore How Do Hypnosis Shows Work

As a scientifically accepted form of treatment, hypnosis has been utilized as a way of helping with human behavior. Mostly, hypnotists use it to control fears and negative tendencies. Hypnotherapists assist their clients to achieve a focused concentration in which they are not aware of their surroundings. This is one of the ways how hypnosis shows work.

Research also shows that a human being is in a hypnotic state at least twice a day. A common example is when one zones out while reading a book.

There is however a whole lot of differences between medical hypnosis and stage hypnosis. Stage hypnosis involves popular shows in which a hypnotist selects random people and creates fun situations.

Of course, stage hypnosis is more familiar. Many people don’t actually believe that hypnosis works. That it is a scientifically proven treatment is, therefore, the last thing they could think about.

For the doubting, Thomas here’s how stage hypnosis actually works. After this, you might want to attend.

The psychology of stage hypnosis

Many people ask frequently, is stage hypnosis real? The answer is yes. Research has been done and solid evidence does exist.

Hypnosis is a unique and genuine state of the human mind.

Even that show that professional performers put up for you, it’s all true. It’s proven that as long as one knows what to say

, what to do, how to do it, why it’s being done and how it works then you can do it.

It’s no magic at all. An experienced hypnotist will get his or her volunteers in a trance as soon as they agree and give consent.

Hypnotists that practice comedy are very well trained and most from the Hypnotist Stage Academy excel. They will go for the person within the audience who will offer the least resistance and wants to be hypnotized. They also want somebody that is willing to give it a go and have a fun personality.

It doesn’t mean that some people can’t be hypnotized. To have the show run smoothly, a bit of cooperation is required.

Who is Suitable for the Hypnosis Show?

The trained stage hypnotist is an expert at reading people. They know who is really hypnotized and who’s faking it.

Besides identifying the willing volunteers, hypnotists can tell who’s not there for the show. The first test a hypnotist will carry out gives a simple instruction and see how well it’s followed.

It should be something as simple as ‘sit and wait for the next instructions’. From here they are observing the participants see how they respond. A volunteer who hesitates to think about the instructions is definitely not there for the show-they’re a doubting Thomas.

So the hypnotist is keen to observe all reactions. There are those that precede and follow the instructions while others take time to question what they are told.

Hypnotists have the ability to distinguish those who act immediately and those that are reluctant. This is how the sort out the hypnotized from those that fake it.

There are no Paid Actors

Most of those who doubt hypnosis argue that the hypnotized volunteers are simply acting. This is untrue. The suggestion that they are paid performers is simply wrong.

For starters, how much are hypnotists paid for all the shows they put up. It is not enough to pay twenty actors. Well although being an actor ain’t exactly your dream job, hypnotists do not use paid actors to grace their shows.

Believe it or not, it is the doing of the hypnotists. You could try it out sometime or have somebody you know quite well volunteer. They will tell you, hypnotists have their fair share of magic-rather science!

Once again, one of the reasons how hypnosis shows work is that no one’s acting anything out. No one practiced and nothing was set up at all. The skeptic believes that hypnotists have met up with the volunteers and briefed them on what to do. Apparently, this is done without any refusals or anyone giving them away?

If this could happen in real life. Had it been true it would be an impeccable achievement for hypnotics. Can you imagine somebody that nobody can say no to?

The question is, wouldn’t you tell on an individual who approached and asked you to pretend before the crowd? I’d do it!

This allegation that hypnotists convince all volunteers to play along quietly alludes to some unexplainable power. It is simply unrealistic. It could be even more skillful and persuasive than actual hypnotism.

So if you are having a hypnotist as part of party entertainment, believe it. None of the volunteers are coached by anyone. They simply follow simple commands that get them in a state of deep consciousness.

It May Fail to Work Immediately

It’s not rare to find a volunteer who isn’t quite susceptible to the instructions. Some people are minimally susceptible. So it may take quite some time.

But this doesn’t mean the process has failed. It actually shows that it’s real. While some people have already become hypnotized and one isn’t responding it means that particular instructions don’t work for them. Most people ask all the time why a suggestion did not get reacted to or how do hypnosis shows work. it takes a while to explain since almost every show is different.

A hypnotist can, however, try a few other techniques in quick succession until they get what works for the hard nuts to crack. It takes an expert to hypnotize some people. I am always amazed when asked how do hypnosis shows work because I also scratch my head sometimes and wonder how and why.

How Do Hypnosis Shows Work

Is hypnotism real? Is it how to brainwash someone? You may ask yourself these questions often. So there you go. It is real, proven scientifically that it actually happens.

It has been adopted as a treatment option. It could actually surprise you one of these fine days when your doctor prescribes hypnosis as your treatment method. Hypnosis is widely accepted in the entertainment industry which we’re all familiar with.

So stop the skepticism. You should actually do it one day. Volunteer and see for yourself how hypnosis works.

For more information on how hypnosis works visit our service blog. 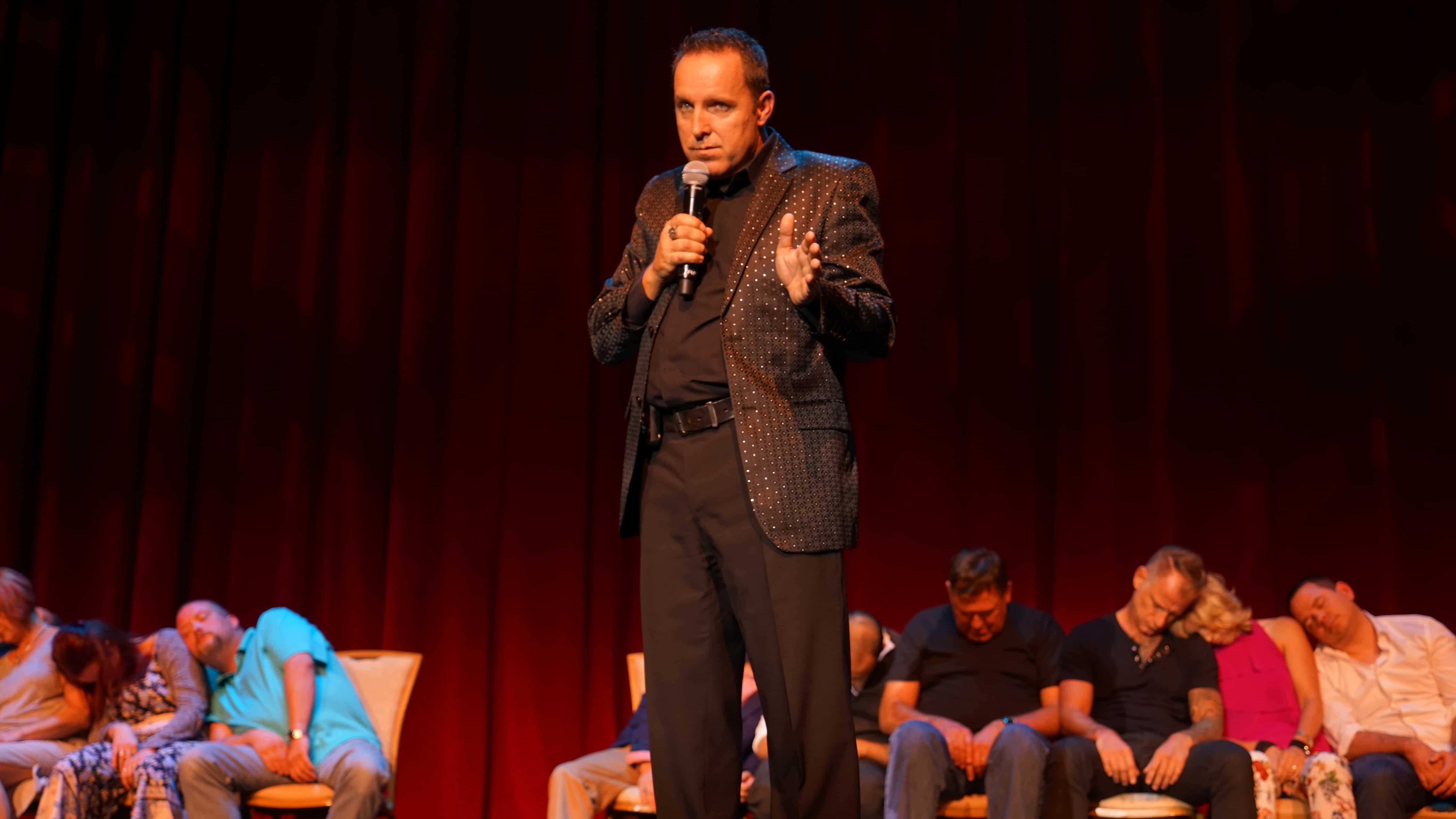 Article Name
How Do Hypnosis Shows Work
Description
Hypnosis shows work by getting volunteers to consent to hypnosis. to do this, the hypnotist must gain trust and rapport from the audience quickly
Author
Richard Barker
Publisher Name
Incredible Hypnotist
Publisher Logo

END_OF_DOCUMENT_TOKEN_TO_BE_REPLACED
How to Be a Street Hypnotist: An Introductory Guide to Street Success

END_OF_DOCUMENT_TOKEN_TO_BE_REPLACED
An Exploration Into the History of Hypnosis

END_OF_DOCUMENT_TOKEN_TO_BE_REPLACED
How to Become a Hypnotist: Where to Get Started

END_OF_DOCUMENT_TOKEN_TO_BE_REPLACED
Safety is Important at a Stage Hypnosis Show

END_OF_DOCUMENT_TOKEN_TO_BE_REPLACED
A Clinical Hypnotist Finds His Passion for Hypnosis Again

END_OF_DOCUMENT_TOKEN_TO_BE_REPLACED
I Learned Covert Hypnosis from the book, “Selling Hypnotically.”